Our oils are steam distilled from the finest plant material 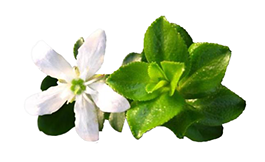 Buchu (Agathosma betulina and Agathosma crenulata. Rutaceae) is one of the best-known South African herbs both locally and internationally. The indigenous people first introduced buchu as a medicinal plant to the European settlers at the Cape. The use of the plant subsequently spread to Europe and America where it was initially used as an antiseptic and diuretic.

Buchu betulina (A. betulina) is a fragrant shrub with round leaves (round-leaf buchu) which seldom exceeds a height of 1 metre. The flowers are star like, and white or mauve in colour.
Buchu crenulata (A. crenulata) is an aromatic woody shrub with larger, elongated leaves (long-leaf buchu) which reaches a height of up to 2 metres. The flowers are white or mauve in colour.

Although the essential oil of the two species basically contains similar chemical compounds, the concentration of individual compounds varies considerably. 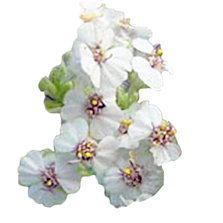 Eriocephalus punctulatus (Asteraceae) is a particularly fragrant, though rare, aromatic shrub endemic to remote mountain areas in South Africa. It is used traditionally for both medicinal purposes and the fumigation of dwellings during cultural rituals. A limited quantity of E. punctulatus oil was produced and marketed during the early 1970’s, and was enthusiastically accepted by the perfumery trade. Unfortunately it was found the wild crafted material failed to regenerate after severe defoliation, and the project was abandoned.

E. punctulatus is a bushy shrub which grows up to a metre in height. The simple needle-like leaves are long, narrow and gland dotted. The inflorescence is a small capitulum with purple disc florets and white ray florets. The fruiting heads extrude their involucre wool, hence its colloquial name; kapok bush.

More about the Cape Chamomile 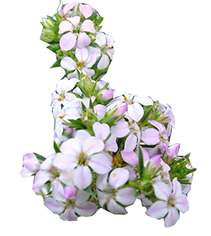 Coleonema album (C. album) is a fragrant shrub with many medicinal properties. In general appearance the plant resembles the European May plant. C. album is a dominant plant of the mountain vegetation of the southern coastal region of the Western Cape. C. album has been domesticated and planted in many South African gardens for its show of flowers. During the flowering season the small white petals cover the ground like confetti after a wedding, hence the colloquial name - ‘confetti bush’. The plant is used extensively as an insect repellent, and a deodoriser.

C. album is a medium to large woody shrub with small ericoid (heath-like) leaves. In spring and summer the bush is a mass of small, white, star-like flowers. C. album is related to.

More about Cape May

ensuring only the best quality 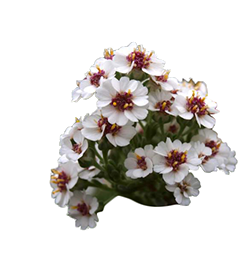 Eriocephalus africanus is a common, fragrant woody shrub that occurs in specific localities in the Western Cape. The leaves are similar to those of rosemary (Rosmarinus officinalis), but are greyer in colour. In spring the plant is covered in small white flowers, giving the impression that the plant is covered in snow - therefore the name snowbush. The seeds are covered with a wool-kapok.

When Schreyver visited the Cape (circ.1677) he distilled a plant called ‘roosmaryn’ growing in the Company’s garden. This is most likely to be E. africanus. In his records he penned “das köstliche Rosemarienöhl” (the precious rosemary oil). This is the earliest record of an essential oil extract from a South African plant.